My third trip in Amsterdam and I was in search of the strongest space cake.

My first time visiting the Dam, I fell in love with the coffeeshops, the unique city structure, and wonderful people both locals and visitors. The vibe that Amsterdam had going on was a combination of buzz and serenity, you’ll see groups of crazy friends celebrating a stag night and you’ll also find loners sitting peacefully with a book in the corner of a shop.

The city is amazing any time of the year but my favorite season would be summer, where you can sit outside shops and cafés watching the street buzzing with young tourist and locals zapping away on their bicycles. There’s something special in the air that keeps bringing me back here again and again, and yes, the smell of weed along the streets too. 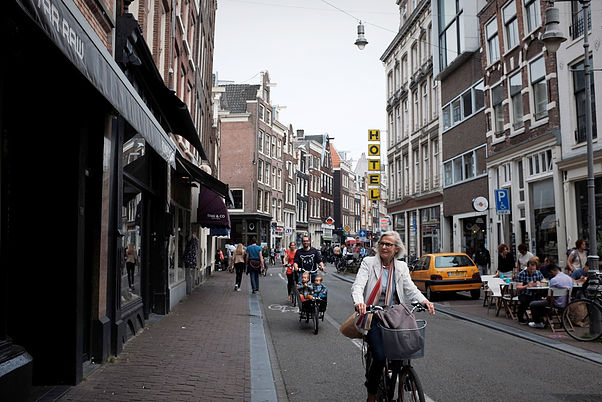 After getting familiar with coffeeshops and what they provide on my previous visits, this time I was on a mission to find the strongest edibles in Amsterdam. I did my research and went off trying around 5-6 places. Whether you are a weed connoisseur or a newbie trying a new vice, edibles are something you should always take with caution as the high could last around 3-6 hours depending on how much you ate and how strong it is.

Most of the edibles sold in coffee shops are space cakes, space cookies, weed muffins, weed brownies, etc. They look yummy and taste good too. You’ll find them in around 40-60% of shops around town, with different amount of weed in them. Prices range around 5-8€ a piece, if you’re paying more than that you’re getting ripped off.

Don’t be fooled as not all coffeeshops are legit with their edibles, such as The Bulldog‘s chocolate ‘space’ muffin which I find it more like a regular chocolate muffin but more expensive and doesn’t get you high (but their milkshakes are to die for, so go for that instead), and Amnesia with their weed edibles being as bad as the attitude and service from the staff.

Some places like Popeye CoffeeShop had some good but not great brownies and cakes too. You can always ask them about the levels of ‘weed’ (they don’t say THC or grams) in the edibles which varies from 0.2-0.4.

Trying some gave me a good buzz but not the kind of stoned I was hoping for until I tried one from Tweede Kamer Coffeeshop, (they had a big renovation from my first visit). As soon as I stepped inside all I could say was that it is one of the most beautiful shops in Amsterdam, decorated with wooden panels and stamp-like prints, a picture of Queen Wilhelmina of the Netherlands and a Dutch painting of a smoking session. Their marble top counter showed a digital menu screen of their weed by the gram, pre-rolled joints, edibles. It was a combination of vintage feel and modern vibes. The shop is rather small but I find it very cozy, and the lighting really brings out the mood of the place, charming and classy.

It was a busy day and the place was packed so I just went in and got one of their ‘hash cake’. It came in a proper package, unlike other places where they would just wrap it up in a piece of paper or food wrapper. This looked promising from the start. I sat outside on the bench munching away, the cake had a slight vanilla and weed aroma but not overwhelming, and the texture was good with a 0.4 amount of cannabis.

I timed myself every time so I would know if the edibles should be kicking in or if it was just another one of those lame brownies. Around 25-30 minutes passed, as I was ready to give up on the quest for edibles and stick to smoking weed and hash, WHAM! It hit me so hard I couldn’t move for a legit 30 minutes, I was lucky to be sitting in a coffeeshop when it hit me, I felt like melting into the couch. It was one of those highs that you’ll never forget.

I love edibles, it’s nice to try something different from smoking and vaping. The only misconception and danger of edibles are that you should always wait at least 45 minutes to an hour before eating another piece or start smoking again, and if you are a newbie that ‘doesn’t smoke’ and you want to get high, edibles might be too overwhelming because the high you get is much more intense both body and mind. I would suggest getting one of those pre-rolled joints and try to take a few puffs or go to a coffeeshop like Voyagers who provide vaporizers. Be patient and go slow, take it puff by puff.

Other than that, edibles are also a good option for people who don’t want to smoke or wants to get really stoned for a few hours. So check Tweede Kamer Coffeeshop out if you want to try some kick-ass edible, but be warned, this is the real deal. 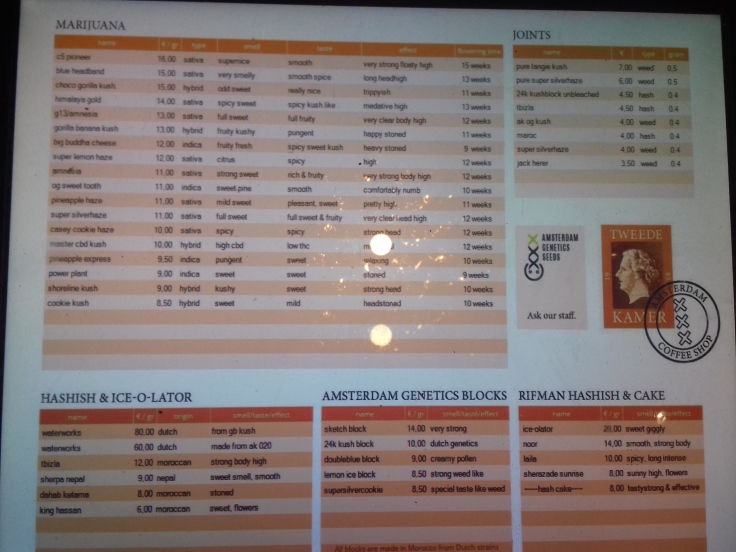 This menu is from December 2017.
Check out other coffeeshop listings from http://www.coffeeshopmenus.org/